PPR is a joint of initiative of PPAF and AKRP which has been developed in light of indigenous people framework to protect rights of indigenous people in Chitral. The Kalashi people have socio-economic and cultural characteristics of indigenous people as defined by the Word Bank Policy on Indigenous People. This project is specifically working to address the needs of Kalashi People needs through engaging them in the project planning and implementation. The project had been started April 1, 2017 and completed on June 30, 2017. Total Value of the project was PKR 98 Million. The Project works in five thematic components such as Social Mobilization (SM), Livelihood enhancement and Protection (LEP), Community Physical Infrastructures (CPIs) and Health and Education. So far, 13 community trainings benefitting 400 people were, 27 small community infrastructures were developed, 12 government schools and 4 Kalash Community were given improvement support and 4 government health centers and 7 bashalanis ( Kalashi Women Maternity homes), 131,  132 poor ultra-poor households  and 155 youth of poor households were given productive support assets and skills under the projects.  Based on the successfully implementation of the project,   agreement for the second phase from July 2017 to June 2018  has also been signed  having total value of PKR 52.7 million. 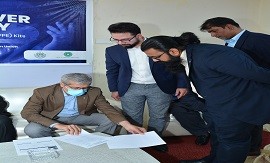