An empowered, equitable, socially cohesive and economically prosperous society in Gilgit-Baltistan and Chitral.

To improve the quality of life of local communities through social and economic development efforts.

The Aga Khan Rural Support Programme is a private, non-profit company, established by the Aga Khan Foundation in 1982 to help improve the quality of life of the villagers of Gilgit Baltistan and Chitral. AKRSP’s development approach gives primacy to the people and their abilities. It is based on the belief that local communities have tremendous potential to plan and manage their own development, once they are organized and provided access to necessary skills and capital. AKRSP’s past efforts have led to many notable achievements in social and economic domains. Key achievements include manifold increase in incomes, construction/rehabilitation of more than 4000 small infrastructure projects (bridges, roads, irrigation channels, hydropower units and other small projects), the planting of tens of millions of trees and the development of hundreds of acres of marginal lands, developing a cadre of more than 50,000 community activists, mobilization of nearly $ 5 million village savings, and the establishment of more than 4,993 community organisations. AKRSP supported community organisations, which have established patterns of local governance that are participatory, democratic, transparent and accountable to their members, are now federating at the union council level to establish Local Support Organization (LSOs). Currently, there 67 LSOs across Gilgit-Baltistan and Chitral that are forging direct partnerships with government departments, local development partners, donors and the private sector actors to increase the scope and outreach of services for their member communities.

Social Development Institutional Development Under institutional development, AKRSP provides support to Local Support Organizations (LSOs) and their constituent V/WOs to undertake local development activities in a participatory manner. Key activities under institutional development include capacity building of local activists and community leaders, linkage building and resource mobilization, and technical assistance in undertaking community managed projects. Gender, Youth and Poverty AKRSP places greater emphasis on promoting gender equality in its program. In the initial years, AKRSP’s main thrust was on promoting Women’s Organisations (WOs) as a collective forum to increase the inclusion and participation of women in social and economic spheres. These village level WOs proved vital in increasing the participation of women in decision making and addressing their practical and strategic needs. Building on this experience, AKRSP currently focuses on promoting gender mainstreaming in its programs, with a special emphasis on increasing the role of women in leadership positions. Youth is considered a key asset and future investment. However, youth issues in Pakistan and GBC remain unaddressed. AKRSP’s new program around youth development attempts to bridge this gap by increasing employability and leadership among youth. Key areas of focus under youth development include employable skills, enterprise development, civic participation and youth leadership; and the promotion of enabling institutions. Poverty is a multi-faceted problem and is addressed through both mainstream activities and targeted programs. AKRSP is implementing special projects aimed at identifying poor and addressing their livelihoods needs through provision of productive assets and employable skills. These activities also envisage linking poor with existing safety nets and social protection programs.

Productive Infrastructure Infrastructure development is a key component of AKRSP’s work in GBC, both to support and develop the institutional capacities of the communities as well as to increase income generation opportunities. AKRSP’s community infrastructure activities typically involve construction of irrigation schemes, link roads, bridges and micro-hydroelectric projects. In recent years, AKRSP has increased its focus on promotion of renewably energy through the construction of higher-capacity hydropower units with active involvement of local communities. As a result of this work AKRSP won two prestigious Awards – Ashden and Clean Development Mechanism (GDN). Over the years, the community needs of electricity have increased for heating/cooking, small enterprises in villages and for social sector services. AKRSP is testing a number of innovative approaches in its new energy projects including the establishment of community utilities, hybrid financing (community equity and loans), and productive uses of energy. Market Development/Value Chain Development Under the market/value chain development, AKRSP’s programs focus on developing promising economic sectors, (e.g. high value agriculture, gems, crafts and tourism) to increase income and employment opportunities for local communities. Key interventions include skills
development, technical and financial support to lead enterprises and market based service providers to increase the scope and outreach of their businesses.

The development model adopted by AKRSP has itself been widely replicated both within AKDN and outside it. A network of Rural Support Programmes now exists all over the country with the mandate to design and implement strategies for alleviation of rural poverty. In South Asia and other parts of the world programmes based on this model have been set up to promote grassroots development through involvement of local communities. AKRSP has received a number of awards, including the 2005 Global Development Awards for Most Innovative Development Project. The award, which was announced at the Seventh Annual Global Development Conference held in St. Petersburg, Russia on 20 January 2006, was given to the development projects that were judged to have the greatest potential for benefiting the poor in developing countries. For more information, please see the Global Development Network website. It also received Ashden Award for Sustainable Energy, or “Green Oscar”, for its programme of mini-hydels, or micro-hydroelectric plants, in the Gilgit-Baltistan and Chitral. The Ashden Award cited the AKRSP for the sustainable and eco-friendly solution: “Unlike dams, which invariably damage the local eco-system, the micro-hydel technology used by AKRSP involves simply digging a narrow channel to divert water along a hillside and into a pipe, creating enough pressure to turn a turbine and so produce 20 -100kw of power.” The impact in areas off the electricity grid has been significant. Over 180 micro-hydel units supplying electricity to 50 percent of the population of Chitral have been built. The projects are implemented, maintained and managed by the communities themselves. 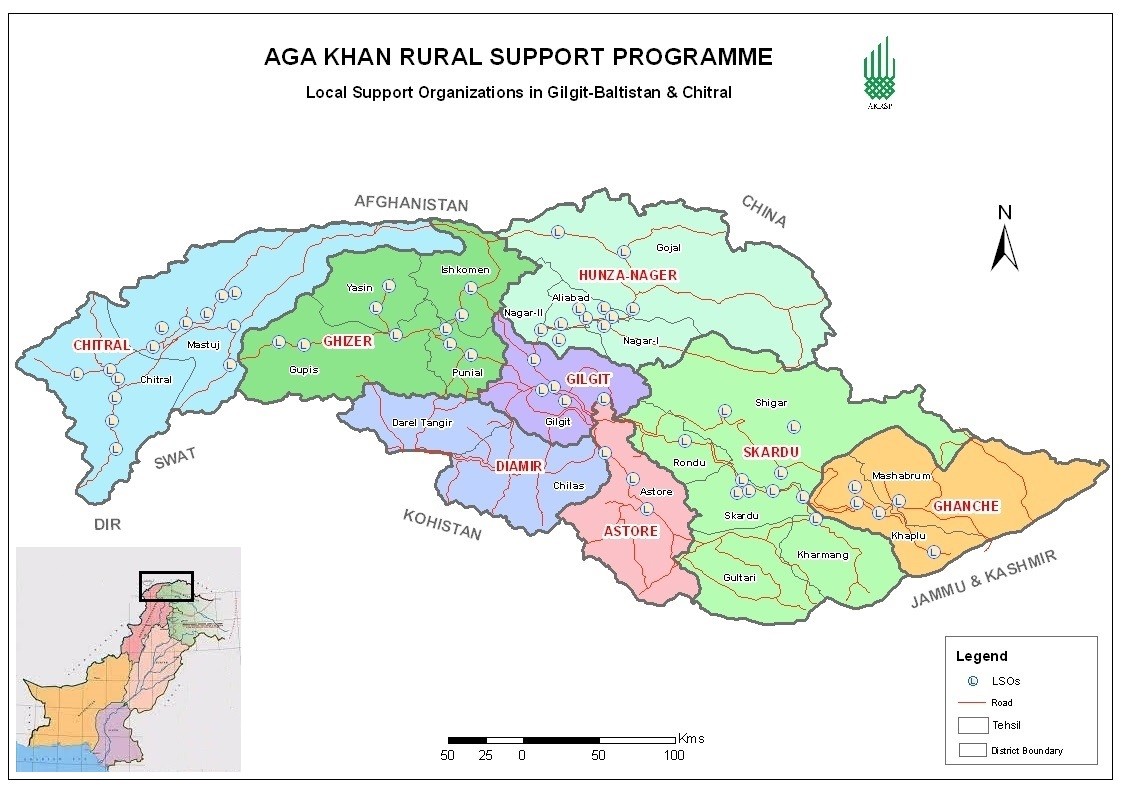